Some people get inspired by a book. Others get things done with their favorite playlist. However, we are not going to talk about that kind of inspiration today. Instead, we are going to talk about what makes us believe in the power of human spirit and overcoming obstacles.

Movies frequently depict stories that we, for one reason or another, enjoy. The stories they tell put characters into situations where they are on the edge for longer than it’s not only comfortable but also conceivable. We can learn lessons from the characters and actors as well, so we have compiled a list of four movies that will take you on a wild ride, and get inspired to do great things.

Few don’t know the story of an obscure part-time boxer searching for a chance to prove himself. It is a story of struggle, poverty, humiliation, and victory. A must-see for everyone. We all love story about an underdog, but what makes this one especially inspiring is not just the movie – it is its star as well.

You see, there were a lot of similarities between Rocky Balboa and Sylvester Stallone before this movie. Stallone was poor, often taking work where he could get it and was struggling so much that he sold his dog to buy something to eat. After selling the script for his movie, Sly bought back his dog. In fact, you can see them running up the stairs together in the film. 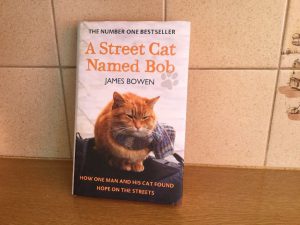 This fine piece is a biographical drama about starting your life over. The main character, James Bowen is homeless and a recovering drug addict. He earns for a living by begging and being a street performer (he plays the guitar). The journey to recovery is not an easy one, and Bowen has to face the stigma of being homeless and a former user throughout the movie.

The first redeeming light at the end of the tunnel is when a cat decided to live with him. This cat, later named Bob, refuses to go away and provides the protagonist with the much-needed company and comfort. The truly inspirational story features the cameo appearance of the real James Bowen, and Bob the cat plays himself.

If you are looking for a movie that relays the message of progress, as well as remind us that we still have a long way to go, look no further. Jackie Robinson, portrayed by Chadwick Boseman, signed on with the Brooklyn Dodgers in 1945. The problems arise when fans, and even Robinson’s own teammates, feel that there is no room for a black player on the team.

Overcoming adversity, and maintaining composure when the world is doing its best to kick you down is the message behind this film. The problems of race are still relevant today, and the movie gives us a glimpse at what is used to be like. 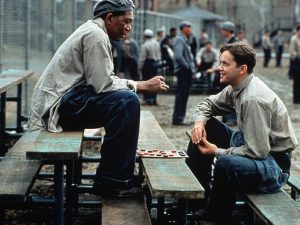 We have saved the best for last. Not just the most inspiring story, but (according to IMDb) the highest rated movie, The Shawshank Redemption takes us to the life behind the bars. The story follows a banker Andy Dufresne, and his mishaps in prison. It shows what it’s like when the system is rigged and corrupt, and there is no way for you to win. Or at least, it would seem that way at first.